'The Karmapa's Temple' is situated in the centre of a landscaped park with one side facing the Puy de Dôme mountain range, and the other facing the monastic hermitage.Its construction has been carried out according to the instructions given to Gendun Rinpoche by the 16th Karmapa. These instructions have been respected in form and spirit by the workers and everyone else participating in its construction. 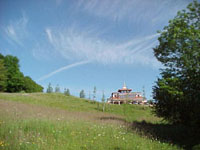 Although the temple has a traditional form which corresponds to Tibetan architecture and sacred art, its construction required modern technology as well as a great deal of daring. The result is an edifice which non-Buddhist visitors and newcomers, find both unexpected and impressive.

The temple and its environment represent the deity's palace and pure realm. This symbolism demonstrates the pure and sacred nature of the site as the basis for the enlightenment of all beings and is a source of limitless benefit and blessing. The architecture is expected to be perfect. In other words it must be majestic without being ostentatious, impressive yet unpretentious ; its opulence reflects the richness of the mind without being baroque. The surroundings must also conform to traditional geomancy in order to create a direct relationship with the mind. Gendun Rinpoche emphasised the need to bear in mind the principle of interdependence, or links (tendrel) which are signs indicating a harmonious future. The immediate surroundings therefore blend in to the general landscape.

The eastern side of the temple is connected with the activity of Buddha Akshobya who is of a dark blue colour and symbolises the emotion of anger transformed into the enlightened wisdom aspect called 'mirror-like wisdom'.

The southern side is linked to the activity of the Buddha Ratnasambhava who is of a yellow colour and symbolises the emotion of pride transformed into the 'wisdom of equality'.

The western side is linked to the activity of the Buddha Amitabha who is of a red colour and symbolises the emotion of desire-attachment and greed transformed into 'discriminating wisdom'.

The northern side is linked to the activity of the Buddha Amoghasiddhi who is of a green colour and symbolises the emotion of jealousy transformed into 'all accomplishing wisdom'.

The centre of the temple is linked to the activity of the Primordial Buddha Vairocana who is of a light blue colour, symbolising the emotion of ignorance transformed into the 'wisdom of the Dharmadatu'.

The work needed to erect this monumental edifice was carried out almost entirely by students practitioners, most of whom had no professional experience whatsoever. Work progressed according to a logic beyond ordinary understanding which often seemed rather miraculous.