In accordance with its oriental inspiration, the layout of the park has been designed with aesthetic as well as spiritual and symbolic considerations in mind.

The Temple's surrounding landscape has been completely reshaped in order to correspond to these criteria while remaining an area of ecological preservation favourable for taking a meditative walk. 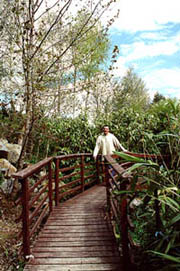 Several tree species have been selected, based on their function and the region's climate. Different varieties of rare conifers have been planted such as: Taxodium Disticum, Metasequoia glyptostroboides, Sequoia-dendron giganteum, Gingko biloba, Pinus sylvestres etc, as well as various varieties of bamboo. These trees fulfil an aesthetic function and comply with regulations imposed by the local authorities.

During excavation of certain areas in the park, four springs were discovered which have become the source for the streams surrounding the Temple. These streams converge into a small pond which feeds a waterfall running into the lake at the bottom of the park. The springs will have to be drilled more deeply in the future as their present output is insufficient.

The park will have to be landscaped and planted more extensively before it is completely accessible to visitors.