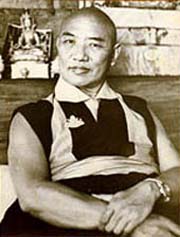 In order to carry out these five wishes, the Karmapa appointed Lama Gendun Rinpoche and Lama Jigme Rinpoche, to whom the centre's spiritual direction was entrusted. Karmapa's first and fifth wishes, the Dharma Centre and the Institute, have been realised at Dhagpo Kagyu Ling in the Dordogne.

The search for a favourable place for the practice of intensive meditation began in 1980, when a group of disciples following Gendun Rinpoche expressed the wish to carry out a traditional three-year retreat under his authority and guidance. The seeds had already been sown for finding such a place in 1977, when Karmapa visited the home of Arnaud Desjardins (a well known French writer on eastern religions) at 'Le Bost' in the Auvergne. During his stay, Karmapa performed two 'Black Hat' ceremonies, establishing a spiritual connection which was to result in the acquisition in 1983 of this property which then became Dhagpo Kundreul Ling.

In early 1984 the first group of retreatants, thirteen men and five women, went into retreat in the old manor house. It was during this first period of retreat that Le Bost's stupa, a support for devotion and practice which symbolises the enlightened mind, was built. From then on many other men and women practitioners wishing to do retreats started to arrive, making it necessary to construct new buildings.