A Tour of Le Bost 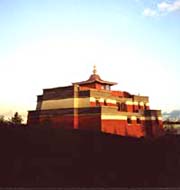 The site of Le Bost is situated in the department of "Puy de Dôme", France. It is 50 km north-west of Clermont Ferrand and approximately 15km from St Gervais d'Auvergne. Visitors can get to Le Bost by taking the D.515 from the village of Saint Priest des Champs towards Biollet, then roughly mid-way between these two villages one takes a small road on the right which leads up to the centre. The site is approximately seven hundred metres above sea level.Its buildings follow a south-east north-west axis, perpendicular to the mountain range of old volcanoes adjoining the famous Puy de Dôme. To the south east of the site, one has access to the Karmapa's Temple surrounded by its landscaped park and the retreat centre for lay people.

On the upper side of the access road one finds the resident workers' lodgings. Adjacent to this is the monastic hermitage's large entrance gateway surrounded by the centre's offices, including the general reception office.

Le Bost's monastic hermitage is structured around the Gyalwa Karmapa's house which overlooks the surrounding lamas' and monks' rooms and the central fountain, symbolising the source of all wealth.

The inner garden is landscaped on progressive levels and is ornamented with various species of rare trees and shrubs. The overall layout is aesthetically pleasing and conducive to contemplation. A walkway running alongside the buildings enables movement within the hermitage that is sheltered from the rain.

To the right of the monastic hermitage, one finds the original old house which can be seen from the road. Below this is an extension of the park with a small pond. On approaching, the visitor enjoys catching sight of the many fish koï living there.

Following the pathway which runs alongside the monastic hermitage, visitors see to their left the entrance to Drodreul Ling, the centre for the second three-year retreat. The long duration retreat centre, Mahamudra Ling, is situated behind this.

Continuing the walk, turning behind the old building, the visitor comes across the Bost's third three-year retreat centre - Tongdreul Ling, and the Remembrance garden, where the ashes of the deceased are preserved.

After the retreat centres one arrives at the stupa which the visitor can circumambulate in the traditional clockwise direction.

Everyone may have access to the tour of the centre described above, with the exception of the monastic hermitage and retreat centres which may not be entered. A map showing this walk is displayed outside the reception office.