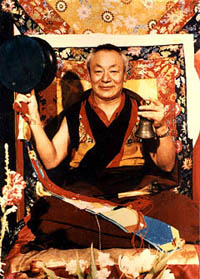 In 1959, when events in Tibet gathered force and the military occupation became complete, Rinpoche was still to be found in retreat. A protecting deity then appeared and directed him to leave for the south, assuring him of her present and future protection.

Without any knowledge of which route to take, Rinpoche left. Relying on the power of refuge of the Three Jewels, he succeeded in crossing the Chinese lines and arrived in India without being troubled by the dangers of the journey. Once in India, Rinpoche went to find Gyalwa Karmapa who entrusted to him the direction of a newly established monastery in eastern Bhutan. He continued in this position for three years. Then due to Gyalwa Karmapa's kindness he was able to go to Kalimpong and stay at the house of a sponsor. He remained there in semi-retreat for a further twelve years.

Each year, Rinpoche went to the Gyalwa Karmapa's monastery in Rumtek where he received numerous transmissions from him. In 1974 when Karmapa was preparing to make his first journey to the west, he spoke to Rinpoche in the following terms:

"I'm going to travel to Europe and to America. Westerners, not knowing the holy Dharma, suffer greatly since their minds are disturbed by pride, jealousy, desire and hatred... The holy Dharma alone can provide a remedy to their suffering. If the conditions for the development of the teaching are gathered together, you will be responsible for spreading it in Europe. There is nothing to discuss, I know the signs; I know that you are a lama who has brought his practice to its conclusion. The time has come for you to accomplish the benefit of beings." 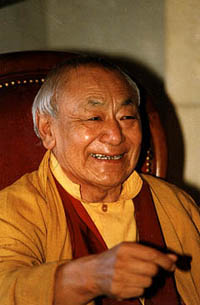 Rinpoche recalls his reaction : "I felt crushed by the prospect of such a task. I remained speechless, unable to reply. The Karmapa then placed his hand on my head and said to me, smiling, 'A benefactor, Mr Benson, has offered me a part of his property in France. An important centre needs to be established there for the spreading of the holy Dharma. Many people will then be able to have access to the teaching and that will be of great benefit to westerners.

Therefore, you are to go to Europe. Don't worry, you have the necessary karma to accomplish this task. The time has come for you to put it into action. I am the Karmapa, if you have a little faith in the name of the Karmapa, you must believe what I say." Thus he concluded, laughing.

"I am an old man." I responded. Gyalwa Karmapa replied "It's true that you are older than I am. Nevertheless, I will part before you, and you will see me again as a child. Your activity is very closely linked to my own. You will reappear again for two lives, very close to myself, after which you will manifest complete Buddhahood."

Lama Gendun Rinpoche arrived in France in August 1975. From this date onwards he gave himself untiringly to the role entrusted to him by the Gyalwa Karmapa, that of transmitting the authentic Dharma to westerners.

His activity took him to a great number of European countries. He passed away on the 31st October 1997 in his room at Dhagpo Kundreul Ling in the Auvergne.