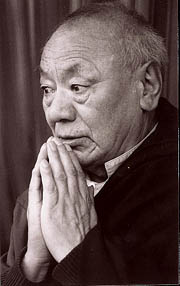 Gendun Rinpoche was born in the Earth Horse year (1918) in the Kham region of eastern Tibet, in an area called Nangchen where the inhabitants are renowned for their bravery and honesty. Many of them traditionally devoted their lives to mystic asceticism and meditating in caves. Lama Gendun's birthplace is venerated as being the place where a legendary yogi called Sangye Yerpa was born in extraordinary circumstances. 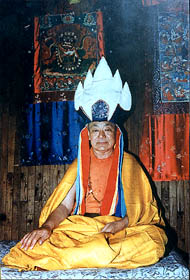 The legend states that Sangye Yerpa was nourished by the milk of a 'dzo' (a female yak) and later on meditated in a cave on the mountainside where he attained full enlightenment. On the side of the rock face one can still see the impression of a Dharma wheel which spontaneously appeared bearing witness to his realisation.

Rinpoche's father Mong-je Dargye was a sculptor of mantras on wood and stone. From his earliest youth, Lama Gendun felt a deep aspiration for the spiritual life. In the summer months when his parents led their herds to the pastures all the family lived together in a large tent.

Rinpoche's favourite game was to find a secluded spot where he would gather leaves and branches to build a hut. He would enter it, sit down in meditation posture and announce "I am a hermit". Then the little boy would make a seat with some earth, fill a vase with water and different substances, settle down on his improvised throne and grant initiations, while reciting prayers. Rinpoche said of this period: "Although I received no religious education at that time, all my aspirations were towards the holy Dharma. I observed the life led by my parents, who were simple and straightforward people, and seeing that they were only preoccupied by this life I said to myself:

'All concerns linked to the world are useless and have no future. Of what use will they be at the time of death ?
An ordinary life achieves nothing good. It can only finish in suffering.'"

I considered deeply the suffering endured by those beings in the hells, and that of the Yidak. I understood that their circumstances were the result of their having been occupied uniquely by worldly activities in former existences. I felt a great pity for their distress and dreaded my parents meeting a similar fate at the time of their death. Reflecting intensely on this way, my mind turned away from worldly affairs forever.

My father tried hard to teach me his craft but his efforts were in vain. I remained incapable of using the tools properly. My parents were concerned for my future and finally yielded to my repeated requests to find a master from whom I could learn the holy Dharma. They resolved to take me to the nearby monastery of Kyodrag where I was able to receive both a religious education and provision for my material needs.'

So, at about the age of seven, Rinpoche began his apprenticeship in the monastic way of life. Although he conformed to the rules of the community, he was little interested by the traditional activities of the monks: reading and reciting texts, making tormas, religious dances, and other formal studies.